Our images of the mystery we call “God” do matter. The ultimate reality that we worship shapes our lives until our final breath. It is important to continually expand our concepts of the Creator, the One in whom we live and breathe and have our being.

No wonder God gave that powerful name to Moses at the burning bush: “I am being what I am being.” Fluid, evolving, free from anthropomorphic boxes of human imagination. Paul tells us in I Corinthians 1:25, “God’s foolishness is wiser than human wisdom.” Even Einstein at the height of his brilliance only touched the floorboards of God’s estate.

I have issues with a certain type of theological box–those who constantly emphasize the divinity of Jesus. You know what I mean: the Cosmic Christ, the Resurrected One, the sinless Son of God, the Ascendant Deity sitting in power on high.

That Jesus holds no appeal for me, and this brings me to a story that I hold dear in my quest to follow the Nazarene’s footsteps. No matter how many times you’ve heard it, the message of this brief incident is prophetic in our fractured world. 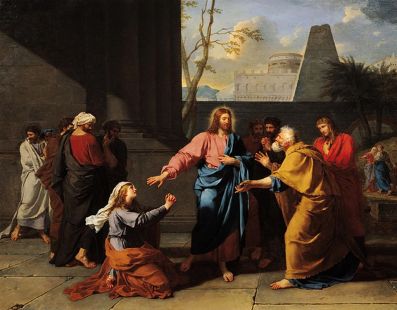 Jesus is travelling in the region of Tyre and Sidon in what is now Lebanon (Matthew 15:21-28). At that time, it was part of the Roman Empire, but had previously been home to the Phoenicians, those legendary seafarers who traded a rare purple cloth dyed from the extracts of a sea-snail.

Jesus encounters a Canaanite woman agonizing over the condition of her daughter, described as “having a demon.” Obviously, Jesus’s reputation as a healer has preceded him because the woman goes to him pleading for help.  But Jesus ignores her, and his disciples mutter, “Send her away; she’s annoying.” Jesus basically agrees, saying, “That’s right; I came only to minster to Israelites, my own people.” Then, in order to brush the woman off, he turns to her and says, “It’s not fair to take the children’s food and throw it to the dogs.”

Ouch! Wait a minute! Jesus just called this suffering woman a dog! Fill in the blank with your most hated racial slur and dog ranks up at the top.

But, what a woman! Driven by loyalty to her child, she perseveres. She throws this incredible line back at him: ““Yes, Lord, yet even the dogs eat the crumbs that fall from their master’s table.”

At that very instant, a miracle happens. I’m not just talking about the healing of the woman’s daughter. I include the conversion of Jesus’s narrow-mindedness. He sees this woman, really sees her, recognizing the imago dei within her. The boundaries of his love stretch to include someone other than the privileged children, the chosen ones of Israel. This Canaanite woman becomes just as worthy of God’s love as any Israelite.

In the end, we must come to this story as the Spirit leads us. Those who insist on the “sinless Jesus” will claim he was only testing the woman’s faith. For me, it is Jesus’s very humanness that endears me to him more. This is a savior who struggled like me, like all of us.

And if a man who called a woman a dog could go all the way to the cross, saying in his final moments, “Father forgive them, for they know not what they do,” then there is hope for humanity.

2 thoughts on “Even Jesus had to Unlearn Racism and Privilege”