Can you name something a beloved family member has taught you, a gem of wisdom conferred through words or example?

One of my wife’s many contributions to my life can be summed up in a simple exclamation: “Look! A cougar!”

I first heard it on a drive through the San Jacinto mountains of southern California. We were on an early date, prompted by our mutual love of nature. The highway stretched before us, bathed in thin sunlight, towering Ponderosa Pines and Black Oaks lining the roadside.

We came around a bend just as a squirrel scampered across the pavement. “Look!” Donna said, “A cougar!”

“Exactly,” she replied with a smile. “If I said, ‘Look, a squirrel,’ you’d hardly be interested. But a cougar? It made you look more closely, didn’t it?”

And here was her lesson in a squirrel’s nutshell: view the ordinary as if it’s extraordinary. Take time to notice and absorb the beauty in life’s small, often stunning, details. 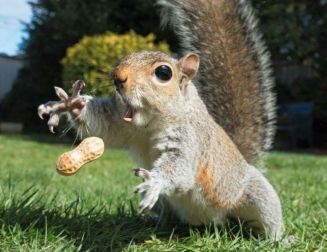 Cliché? Perhaps for some of you, but it was a lesson I needed, and she knew it. As a cleric, I had often waxed eloquent about the need to live in the present. “Consider the lilies” was one of my favorite admonitions from Jesus. But my frenetic inner dialogue, fueled by a hyperactive metabolism, compelled me to move too fast. Even my time outdoors was spent cataloging memories, taking photos, “bagging” peaks to add to my list.

Slowing down, luxuriating, settling into this infinity of the present: it wasn’t easy. Sometimes it still isn’t, but inexorably, like drips of water forming a stalagmite, it has changed my life. It’s why I often share this age-old salutation from the Roman poet, Horace: “Carpe diem!”

How about you? How is your mindfulness of each passing day? Lebanese American poet, Kahlil Gibran, once said, “In the dew of little things the heart finds its morning and is refreshed.” This dawning can happen any moment, because it contains all we need to banish preoccupations and experience this Presence that surrounds us.

You may know the story of Brother Lawrence, son of a poor French family in the mid-1600s. His lot in life was so desperate that he joined the Army just to secure hot meals and a bed. Stationed at a lonely outpost in the winter, he had a life-changing experience. He was gazing at a barren tree standing in a field of snow – no leaves or fruit – but the knowledge that it would once again flourish come springtime made him realize that the grace and promises of existence are with us always.

Lawrence later joined a monastery in Paris, and because he lacked formal education, he was told to labor in the kitchen – cooking, washing dishes, mopping floors, scrubbing walls. There, at the bottom of the pecking order, he resolved to experience – once again – the truth he had glimpsed in a frozen French landscape.

The result? A legacy of mindfulness passed on through a compilation called “The Practice of the Presence of God.” I close with his words – overtly Christian, yes – but followed by a simple summation.

“The time of business does not with me differ from the time of prayer, and in the noise and clatter of my kitchen, while several persons are at the same time calling for different things, I possess God in as great tranquility as if I were upon my knees at the blessed sacrament.”

Look! A pot! A mop! A cougar! A moment to be seized and savored!