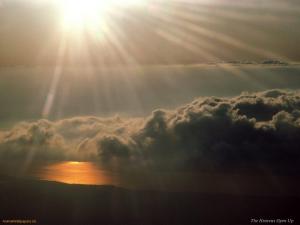 We continue to examine the 12 Steps, a pattern that can help ALL human beings live freer, more joyful lives.

Step 2: Came to believe that a Power greater than ourselves could restore us to sanity.

Let’s take this Step in reverse, starting with the word “sanity.”

Perhaps you know someone who lives with the stigma of mental illness, traditionally called insanity. You see how painful it can be. You may have witnessed the insane descent into misery of an addict or alcoholic.

But how about the rest of us? Do we need to be “restored to sanity?”

The definition for insanity used most frequently in 12 Step programs is familiar: Doing the same thing over and over, expecting a different result. Or, returning again and again to dry wells, determined to find fresh water.

For addicts and alcoholics, this futile activity is painfully clear. Repeated attempts to control our drinking or drugging proved insanely fruitless until we surrendered to our powerlessness. Ironically, in broken submission we found miraculous strength.

But chemical addiction is not the only karmic lunacy. I mentioned others in the first post of this series.

• Trying to predict future outcomes.
• Nursing ANY resentment.
• Regretfully ruminating over past mistakes.
• Worrying about the perceptions others have of us.
• Fretting over finances.
• Obsessively seeking validation externally, rather than internally.
• Stressing about health issues.
• Attempting to change the behavior of another person.

In Step 2 we not only acknowledge that we are practicing these “insane” behaviors, but that our repeated efforts to cease have failed. Quite literally, we need help beyond ourselves.

This is when the 12 Steps suggest a path that is difficult for some. Kierkegaard called it “a leap of faith” – coming to believe in a force beyond us.

12 Step programs are non-sectarian. This power, by whatever name and conception, is up to individual choice. Fundamentalists, especially of the Christian tribe, criticize this freedom, saying it is New Age, unmoored from history or scripture. Some cynically call it BYOG – Bring Your Own God.

But don’t we ALL come to faith this way? Theological gymnastics will never “prove” the objective reality of spiritual revelation. Our tiny minds can only partially grasp the Infinite.

12 Step programs steer away from debate. They point instead to personal experiences of God’s presence. Subjective? Sure. Impervious to the scrutiny of debaters and deniers? No. But let me share the miracles I see every day in those who are recovering.

We were at death’s door step. We knew our insane behavior had taken everything from us except our heartbeats. We had lost hope, and the darkness around us had become what AA describes as “incomprehensible demoralization.”

And then we surrendered. First to the mentoring of those who had trail blazed into the light. Then to our own conception of a Higher Power. This is when miracles began to occur, slowly, then gaining momentum, until we had an epiphany contained in the AA “Promises” – We will suddenly realize that God is doing for us what we could not do for ourselves.

Sound far-fetched to you? Keep reading, because this miracle unfolds through one critical action that each of us can take. It is found in Step 3.

Krin Van Tatenhove grew up in the Los Angeles area, but has lived all over the country: Nevada, New Mexico, South Carolina, and now Texas. He was an ordained Presbyterian pastor for 32 years, with simultaneous experience as a Hospice chaplain, Director of two projects for Habitat for Humanity, substance abuse counselor in both Nevada and Texas, writer for newspapers and magazines. He has written numerous books, and is the co-author of "Neighborhood Church: Transforming Your Congregation into a Powerhouse for Mission," released in 2019 Westminster John Knox Press. Krin and his wife, Donna, have a blended family with four children. View all posts by krinvan