Keith blew in with a cold front three days before Christmas, already seated on the front 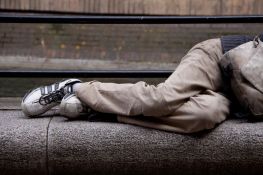 steps of our church as I got to work. His clothes were filthy and threadbare, and the face that peered out from beneath a hooded sweatshirt was reddened by more than wind. Body odor and booze fumes tore at my nostrils.

“I was wondering if you could spare a few dollars,” he said.

“I don’t give out cash,” I answered. “I’m not judging you, but people drink up the money as soon as I give it to them.”

“Yeah, I do drink some beer,” he said with a smile.

“How about I take you to get something to eat?”

“No thanks. I already had one of those breakfast burritos at McDonald’s.”

“How long have you been homeless?”

“If you want, “I said, “I can get you a room at the Rescue Mission. They’re a great outfit, and I know the people in charge. They’ll help you get settled, find work, make a new start.”

“No thanks. I prefer to be on the road.”

“OK. Is there anything else I can do to help you?”

“Actually, I could use some new shoes and a coat.”

What an understatement! His black tennis shoes were soleless and his flimsy sweatshirt was no buffer to the cold.

“Tell you what,” I said, “Let me take you to the Trash and Treasure Resale store and we’ll see what we can do.”

Friends, never underestimate how the simplest of gifts can make a difference in someone else’s life! Truly one person’s trash can be another person’s treasure. I took Keith to the store, an ecumenical ministry in our town, praying silently they would have what he needed. My prayers were answered. On the shoe shelf was a sturdy set of leather Skechers, his size, barely used. And there on the rack hung a beautiful wool coat with quilted lining and an over-sized hood.

I held out the coat with a flourish, mimicking a sales clerk at Men’s Wearhouse.

He laughed and slipped into it, playing his part. Perfect fit.

“I really appreciate your help,” he said.

“No problem,” I replied. “Are you sure you don’t want me to get you a room at the Mission? They’ll help you in ways that I’m not able to.”

“I’m sure. I think I’ll just head down to Kingsville. I once spent a Christmas there. Can’t even remember what year.”

We exited to the back alley. You could feel the coming front in the cold, sharp wind. I shivered, imagining how Keith would fare during the night. He thanked me again as we shook hands. Then he strolled off down the alley, resplendent in his new shoes and coat.

Just before he rounded the corner, he stopped, lifted his arms and shouted “Merry Christmas, everyone!”

Krin Van Tatenhove grew up in the Los Angeles area, but has lived all over the country: Nevada, New Mexico, South Carolina, and now Texas. He has been an ordained Presbyterian pastor for 31 years, with simultaneous experience as a Hospice chaplain, Director of two projects for Habitat for Humanity, substance abuse counselor in both Nevada and Texas, writer for newspapers and magazines. He has written numerous books, and is the co-author of "Neighborhood Church: Transforming Your Congregation into a Powerhouse for Mission," just released from Westminster John Knox Press. Krin and his wife, Donna, have a blended family with four children. View all posts by krinvan

2 thoughts on “Blowin’ in the Christmas Wind”